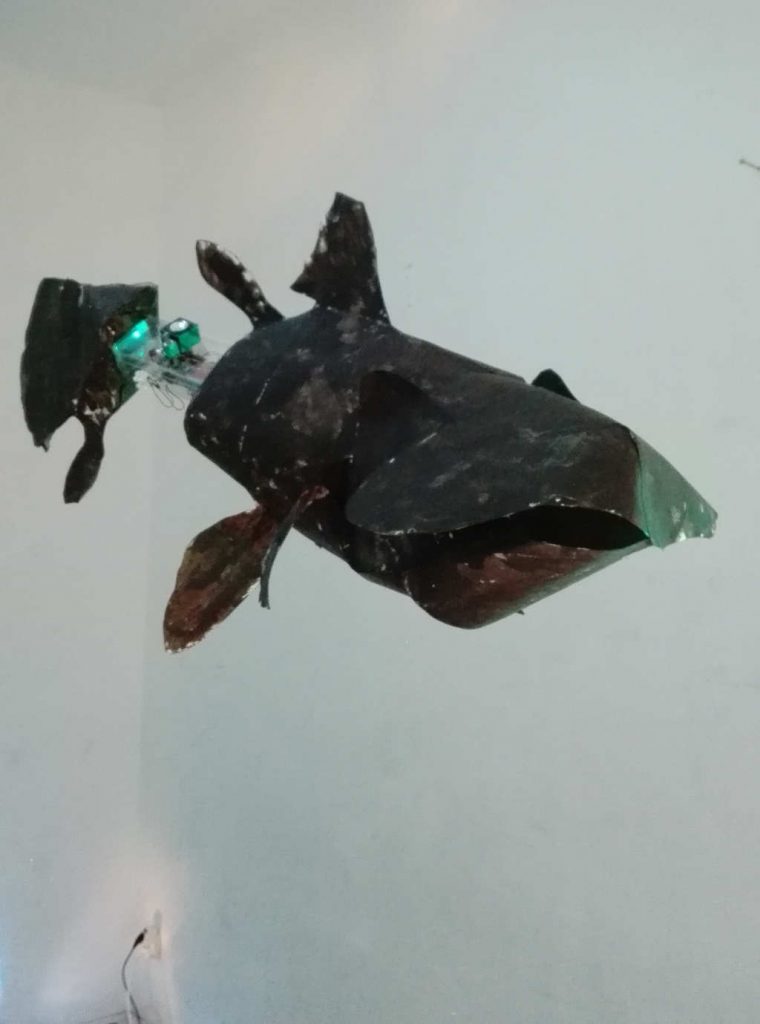 The exhibition space becomes a fishtank: the fish sculptures are shaped after the model of coelacanths, a species that has been around for millions of  years. They are considered living fossils. Coelacanthes have biosensors for electromagnetic fields that they use for orientation in the lightless depths of the sea. The sculptures are each equipped with a sensor that sonifies the electromagnetic fields of their immeadiate surroundings. Electromagnetic fields are  everywhere. Every living organism, but also electrical equipment produces them. The sculptures thus generate a resonance chamber and create an acoustic map of people and machines. The installation produces a delicate soundscape, only audible for the attentive visitor.

Coelacanthes were long considered extinct – the last fossils are about 70 million years old. Reports of coelacanthes were considered apocryphal. Only 1938 the naturalist Marjorie Courtenay-Latimer discovered the fish on the East coast of South Africa near the mouth of the river Chalumna in the Indian Ocean. Cryptozoology deals with animals for whose existence there is no proof, only vague clues in the form of local reports, fairy tales and blurry photos. Anthropologists and zoologists normally do not take this research seriously because it does not follow accepted scientific methods. Sometimes, however, the mainstream scientific community must make concessions. As with the coelacanth, on occasion stories and myths prove to be a valid source of knowledge. Another example is Alexander von Humboldt’s observation in March 1800 on a voyage to the Amazonas. He saw electric eels jumping of the water like dolphins and fatally attacking horses. For a long time this report was dismissed as unbelievable, until 2016 experiments with the dangerous animals showed exactly the same behavior. The artwork Coelacanth focuses on the competition between the different forms of knowledge. It compares the language of art with the language of science. Both are ways to convey complexity. Art wants to understand science, but not become science. It deals with the idea what good science is or should be.