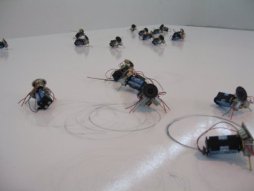 Horde is an installation, a sculptural object and a technical network. Dozens of vehicles are moving autonomously and erratically on a white, shiny platform. Each vehicle maunders, i.e. vocalises fragments of various specialised texts on information, disinformation and information retrieval. The aim of Horde is to illustrate the chaos of the modern media-generated overload of information and how scientific approaches can help us to deal with it. In order to build a contrast to the cacophony generated by the vehicles, Dominik Kuropka, who is a specialist in semantic web services and information retrieval, has applied a scientific method to the texts. Kuropka, who researches information retrieval and filtering systems, has organised the texts along a coordinate system with the help of a ‘vector spacer’. A vectorspacer is a tool based on a simplified version of the vector space model, and processes and classifies texts.

The texts processed in this way are arranged in the exhibition space according to their numeric multi-dimensional representation in the vector space model. As a result, the color and placement of the texts reveal similarities between the various texts and bring a visual order to the babble of voices.