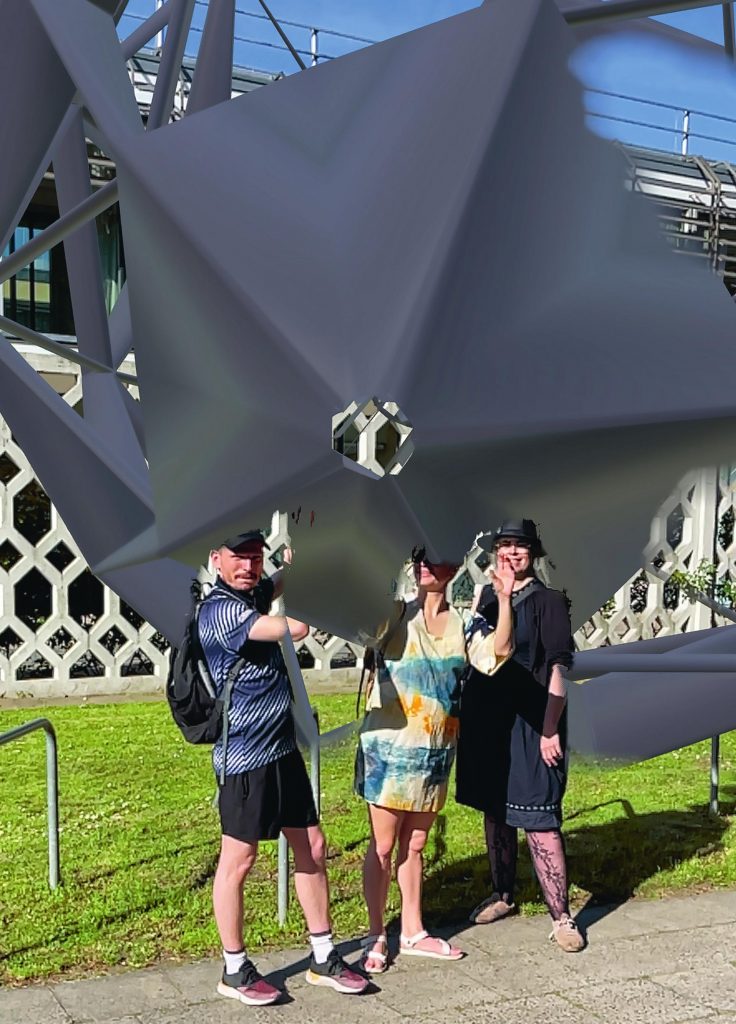 In the 1950s and 60s, architects, designers and artists such as Horst Bauer, Josef Kaiser, Fritz Kühn, Regina Junge and Klaus Wittkugel gave the utopias of GDR modernity an aesthetic form along Karl-Marx-Allee. The architecture of free flowing space stood for social equality and reflected the ideas of the modern socialist system. Drawing from avant-garde concepts formulated by Le Cor- busier and the Bauhaus in the 1920s, they created an environment inspired by futuristic themes such as outer space.

For their digital intervention Simultaneity, Joachim Blank, Karl Heinz Jeron and Sakrowski have cre- ated an obstacle course made up of 19 carefully selected geographical points. A map provides a QR code for each of these points. The codes can be scanned on smart phones or tablets to show site-specific augmented reality objects. The walk- ing tour guides visitors to representative areas of the boulevard via symbolic narrations. Visitors will also be led to the second row of Karl-Marx-­Allee’s

residential buildings. Located farther back from the street itself, this area offers more idyllic spac- es in nature that are often surreal in character and invite pedestrians to linger and play.

The expanded reality of Simultaneity connects the aesthetics of Socialist Realism to the last thirty years of computer game design. Relics of the past such as Sputnik or the Lenin memorial torn down in 1991 encounter contemporary figures like Lara Croft or the Hulk in the present. Objects that have long been removed from public view become vis- ible once more with the help of augmented reali- ty technology. Baldur Schönfelder’s game device Moon Station, for example, returns as a virtual sculpture. An interactive element enables users to project hashtags into urban space and publish them on social media. Everywhere we see the “initiated” holding pencils before the winked eyes of the “uninitiated” explaining the mysteries of 3-D. Morton Heilig, Cinema of the Future, 1955

In 1960 the US-American cameraman Morton Heilig received a patent for the Telesphere Mask, the first instrument in the world to produce virtual projections before the user’s very eyes. At the same time an aesthetic paradigm shift was taking place during the reconstruction of Berlin, from architecture in the national tradition as seen on Stalinallee to the socialist modernism that remains clearly legible to this day on Karl-Marx-Allee, as the street was renamed in 1961, between Strausberger Platz and Alexanderplatz. Joseph Kaiser, one of the main architects involved in this shift, called it “a step on the path towards industrial ar- chitecture” in the newspaper Neues Deutschland on 1 January 1960, adding that the latter could be considered “successful when the working people of Berlin and Germany recognise in it an image of optimism and the beauty of life beyond all techno- logical concerns – as well as a breath of fresh Berlin air”.

In 2021, the holy mountain on Schillingstraße goes unnoticed by most pedestrians. Its luminous green flowing surface is reminiscent of the three basic elements of a locus amoenus, or a pleasant place: trees, grass and water – rarities in this part of the city. This unusual elevation­ in the land is an augmented reality object, and can thus only be experienced if retrieved via QR-code on a smart phone or tablet.

The virtual sculptures that make up the project Simultaneity by Joachim Blank, Karl Heinz Jeron and Sakrowski all reanimate, idealise and expand the past via association while also commenting upon, caricaturising and illuminating the future. Thus liminal figures get up to all sorts of tricks in Karl-Marx-Allee’s second section and its surround- ing residential and representational buildings, some of which are still transitioning from GDR modernism to postindustrial global capitalism.

Together, media artists Blank, Jeron and Sakrow­ ski­ embark on an apophenic balancing act between contemporary reality, a utopian socialist past and the fantasy world of computer games. Historic references going back to antiquity can be found in their collective digital work as well as in a number of artworks dating back to when the neighbourhood was first constructed. Many were created using forms, technologies and materials that have been used for artwork for thousands of years, such as painter Bert Heller’s mosaic Sze­nen aus dem Leben der Völker der Sowjetunion (Scenes from the Life of the Peoples of the Soviet Union) at the entrance of Café Moskau, which was executed by Heinrich Jungbloedt. There is even a digital reference to the timeworn work of ceramicist Regina Junge, which has been largely destroyed. For her diploma project at the Weißen- see Academy of Art in Berlin she made a series of ceramic vessels threaded on a string like colourful beads, which were encased in a concrete wall made to resemble an open rack. Unshackled from this immobile frame, the Simultaneity artists have created free-floating objects such as golden skittles, seashells and purple bowls that float freely down Schillingstraße for the AR-point Junge Kera­ mik (Young Ceramics). The question of wheth- er these are spoils or dispensations and whether they are being reused in a new context or truly lib- erated from their old one also arises when view- ing Facettenkugel (Facet Sphere), a work by arti- san blacksmith, metal sculptor and photographer of the Neue Sachlichkeit (New Objectivity) move- ment Fritz Kühn, who lived in the German Demo- cratic Republic and also worked in the Federal Re- public of Germany. Their solid appearance, which can only be guessed at from behind windows and walls since the closure of Café Moskau, can now be visualised once more in 3D at a larger than life scale on the sidewalk directly outside the café.

It’s unclear whether Lynceus, guide of the Argo imbued with x-ray vision, really saw the Amazons on the island Aretias in the black sea on the Ar- gonauts’ journey to Colchis. And yet, they did not dare dock their ship at certain parts of the coast out of fear of these legendary female warriors. A fearsome member of this nomadic tribe from Asia Minor, also larger than life, has now snatched Lenin’s head and is carrying it straight down Karl- Marx-Allee’s central reservation, which was once used for military parades. From 1970 until 1991 today’s Platz der Vereinten Nationen was home to a monument of Lenin, which was later destroyed and divided into 129 fragments to be buried in a sandpit. Made of Ukrainian red granite, the head alone weighs four tons and has been on view at the Spandau Citadel at the Western edge of the city since 2015. Now it can also be seen in aug- mented reality, caught in the clutches of a shining silver amazon.

If and how such multi-layered stories lead to new perspectives can be debated interactively in the area between the Berlin Mitte District Town Hall and Kino International. Hashtags and short messages can be left behind in virtual space. Their font is inspired by the one used atop Café Moskau and Kino International, which was created by graphic designer Klaus Wittkugel in 1963.