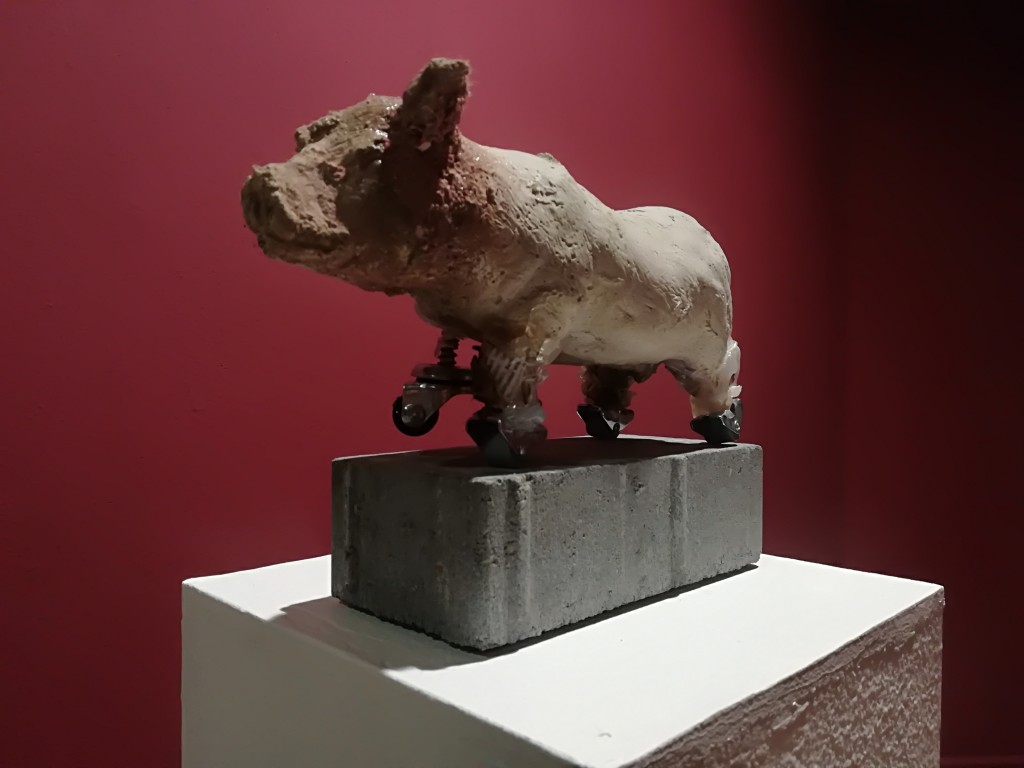 Concrete sculptures recite text fragemnts based on Orwell’s Animal Farm and Lenin’s book One Step Forward, Two Steps Back (The Crisis in Our Party). The underlying motto is Lenin’s quote “But every little difference may become a big one if it is insisted on”. It is about types of social disorders.

The texts are manipulated with a Markov algorithm. With a Markov chain one can make predictions for the future of the process based solely on its present state just as well as one could knowing the process’s full history. New meanings are created.

Lenin devoted several months to the writing of One Step Forward Two Steps Back (The Crisis in Our Party), making a careful study of the minutes and resolutions of the Second Party Congress, of the speeches of each of the delegates and the political groupings at the Congress, and of the Central Committee and Party Council documents. In Animal Farm by George Orwell, the character Old Major (a pig) represents Lenin. He and Old Major share a parallel background. Old Major was the “prize middle white boar,” a respected animal on the farm. And Lenin was a Russian nobleman, born in a wealthy family. Paradoxically, they were both heavily responsible for the revolution that happened in their respective circumstances. Old Major was responsible for the revolution in Animal Farm, because it was he who motivated the animals with his speech. Old Major led the animals to rebel, just like Lenin led the Russians to rebel, both under the practice of communism.

However there is a difference between Old Major and Lenin. Old Major died three nights after his speech, he did not participate in the take over (October Revolution) or the battle of cowshed (civil wars). On the other hand, Lenin was there during the revolutionary years. This suggest that Old Major also represents Karl Marx.

Parallels Between “Animal Farm” and the Russian Revolution

One of the main ideas in George Orwell’s “Animal Farm” is how each event in it parallels an event in the Russian Revolution.

Old Major’s vision of a farm where animals ruled, where there were no human oppressors, is a direct match to Marx’s vision of a communist society. In his Communist Manifesto, Marx envisions a world where everyone is equal, and where those on the lower rungs of society have as much say as those on the upper rungs. Although both concepts are nice in theory, “Animal Farm” shows that too much power can corrupt anyone. When Old Major’s vision, later called “Animalism,” was put into practice, the pigs in charge took over and became selfish and violent, twisting the philosophy until it barely contained an echo of the original intent. The same thing happened with communism, as Stalin left much of the country penniless and helpless, and put people to death if they showed the slightest resistance to his regime.

The art work is a kind of an absurd theatre play.