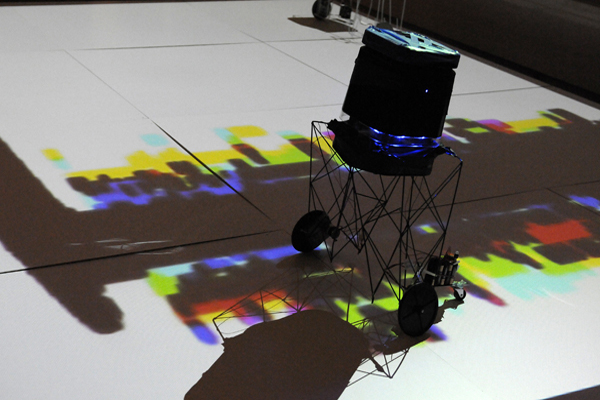 A multimedia opera with robots and overheard mobile conversations in four acts. “I’m sitting in the train. Where are you?” Everyone has a mobile phone these days and what was once a conversation in closed rooms is nowadays happening in the public sphere. The mindless phone monologues in busses and trains have irritated the German artist Karl Heinz Jeron for years. A few months ago he began to write them down – two notebooks have already been filled. This is the basis for the libretto of an opera performed by tiny singing robots: two soloists and a choir. For the setting to music he collaborates with the composers Robert Jähnert and Christian Rentschler. The stage scenery is a video projection of public domain images.  The Libretto’s terms have been used for the image search.

The title is derived from Hermes, the god of elocution. The mobile phone conversations are arranged around general concepts like secret, sex, guilt, betrayal. In these four acts the artist stages the recorded conversations and transforms everyday life into artistic action.

It‘s becoming clearer  what just happened. It‘s about the following: I know I‘ve done it subconsciously all my life. And what appened last year, was already there. There just wasn‘t enough proof. I could only think: What the hell is going on? How to deal with something like that? I don‘t know if it‘s true or not. It‘s an ongoing thing

with us, you know that, and it doesn‘t stop.

Excerpt of the libretto, act one, “The Secret”